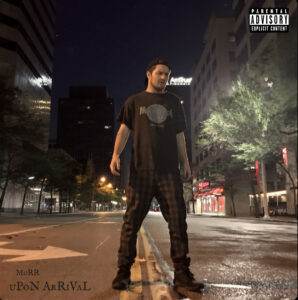 CLEVELAND, OH — On Aug. 6, Murr surprised his fans with new single, “wHo Is GoNnA sAvE uS?” where he asked his listeners to reflect on the year that has been. Turns out this was just an introduction to something more.

Now, he follows up and unveils yet another surprise: a four-song EP titled, “uPoN ArRiVaL,” where he works to process and make sense of the world as we know it. The project will be streaming everywhere on Aug. 20 and he will be performing a live premiere that night at the B Side Lounge in Coventry, Ohio.

“Going into 2020, I was really optimistic about where things were heading. I had just released my first EP, “Cloud 99,” and was riding that wave. I was also just starting to get past a tough time where my dad experienced a heart attack. He survived it, but it definitely took a toll on me mentally. So I was looking at 2020 as a fresh slate with nothing but positivity and even kept repeating the mantra “2020 Vision” as I was starting to see myself and the world more clearly.”

As we all know, 2020 came with a great deal of hardship and tragedy. So how did Murr, the ultimate optimist, respond to all of this while he was expecting to step softly onto the white canvas he had worked towards for years?

“I had been kind of a rogue for the last few years working non-stop to develop my brand. “uPoN ArRiVaL” represents my landing back on Earth after years of tunnel vision. I was ready to reconnect with old friends, share what I had found and just vibe out. Looking at the world in its current state…it was a lot to take in. It pained me to see so much unrest. So I did what I do whenever I’m trying to understand something – I began reflecting and writing throughout the year and the EP was born. This project is my initial shockwave response to 2020.”

Murr is an evolving, multi-genre artist who recently performed his first live venue sets in Cleveland. Friday’s show at B Side Lounge will be from 7 to 9 p.m. and will feature several other local acts. Drop by, grab a drink and join Murr and company to celebrate this latest release. Message him directly on Instagram @TheWorldOfMurr for more information.

“While listening to this EP, I encourage everyone to take some time to think, reflect and evolve your perspective as an individual and as a part of our humanity. Embrace your own humanity, don’t try to be perfect, and just ask yourself, “Where do we go from here?”